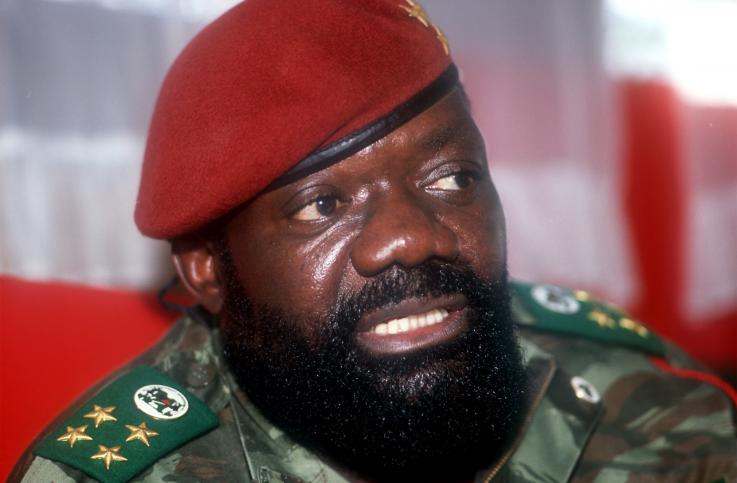 The former leader of Angola’s Unita rebel group, Jonas Savimbi, is being reburied 17 years after his death.

Thousands of former Unita fighters wearing white T-shirts emblazoned with images of Savimbi attended the ceremony in his home village of Lopitanga.

His 2002 death brought an end to one of Africa’s longest civil wars.

His remains were finally handed over to his family on Friday following confusion earlier in the week.

Unita says the funeral ceremony will be an important step towards national reconciliation in the oil-rich nation.

However, no government representatives were present at the ceremony, reports the AFP news agency.

His coffin was draped in Unita’s green and red flag.

Angola was a Cold War battleground, with the US and apartheid South Africa backing Unita, while the governing MPLA received support from the former Soviet Union and Cuba.

Who was Jonas Savimbi?

Savimbi, known as the “black rooster”, was an extremely divisive figure.

He was accused of widespread atrocities but was also a charismatic leader revered by thousands.

He was killed by government soldiers in 2002 and was hurriedly buried in a cemetery in the central town of Luena. His grave was marked by a cross of iron on a mound of red soil, AFP reports.

He will be buried near his father.

His family and Unita officials had demanded his reburial for many years to no avail.

The impasse was broken after his long-time foe, Jose Eduardo dos Santos, stepped down as president in 2017.

His successor, Joao Lourenco, agreed to their demands and his body was exhumed earlier this year, with DNA tests confirming his identity.

Durão Sakaíta, one of Savimbi’s eldest sons, told the Lusa news agency that the family would “finally be at peace” after he was reburied.