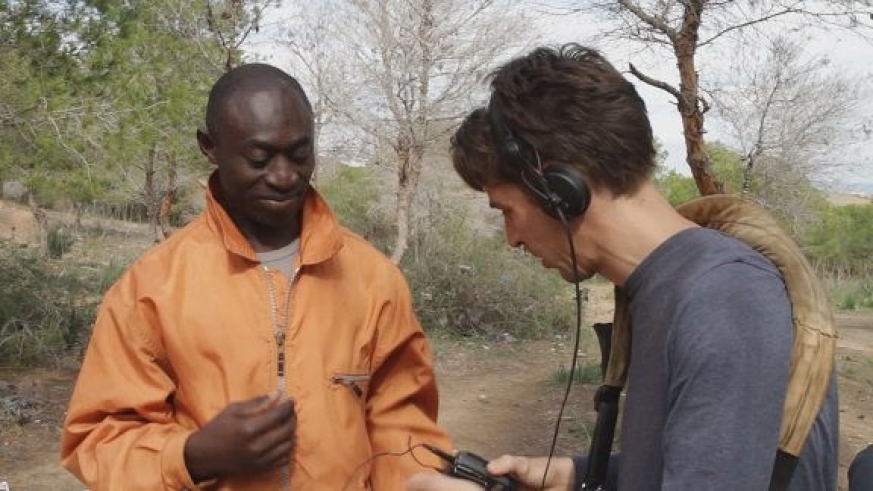 Preus is a multiple-time winner of awards and he is particularly known for “When Paul Came Over the Sea – Journal of an Encounter”, a famous documentary that depicts a story of an immigrant from Cameron who tries to cross the sea to go to Europe.

The documentary has so far been screened in 20 countries across the world.

Last month, Preus received another prominent award in Germany for his film. Sunday Times spoke to him about his career, immigration and filmmaking.

For those who may not be aware, who is Jakob Preus?

I am 43 years and I was born in Berlin. I went to school in France and I studied law in Paris and Germany. I lived in Russia and did my masters in Poland.

Actually all my studies weren’t about filmmaking but more about international politics, diplomacy and that is also what I worked in for the first few years.

That is how I went into filmmaking, but perhaps that is why my films also have social-political background, because that is where I came from.

Was it a natural decision to divert from a law career?

I think it was more because I understood that I don’t want to have a career in a a bureaucratic structure. I don’t want to sit in office; I will have trouble if I have three bosses above me who will correct everything I write.

I enjoyed mostly when I was in other countries learning new cultures and I remember when I was 16, I actually travelled to France alone and stayed there.

From then on, I travelled around, lived in Spain, and did my civil service in Russia.

For me the most exciting was always to get to know new cultures, new languages and to be close to people and get to know their worlds. I had a feeling that if I was a diplomat or if I was in the ministry I would never get a chance to do that.

That is when I decided to do something else.

What was the beginning?

Well, I had a friend who was a cameraman who had just finished his training and told me; Jakob you are good at languages, you have seen a little bit of the world, I can do camera, why don’t we do a film?

I said that is quite an idea and he said let us go to Iran, and everybody said to me you are crazy. That was in 2002 and that was a year after 9/11terrorist attacks.

There was a big interest and dialogue with Islam.

At that time I had just met a professor from Iran who was at the time a revolutionary but now a big reformer. He facilitated our visa and everything. I spent six weeks, travelling across Iran and I did my first film there, which was perhaps not as professional as now.

The movie was called “Torn Iran: Young People’s World and Islamic Republic” and the idea was to allow people who are not Iranians to get insight into how the country is.

Where then did you move to?

I moved to do my second film in Bosnia and it was called “The Unburied War”. It was ten years after the massacre the country had experienced. Another film was in Ukraine and now, the film about Paul, a Cameroonian who crossed the sea.

Were these films following the same ideology you had in the beginning?

To be honest, I never have prefabricated ideological message. I want to show how life is.

Sometimes people ask me many questions like who paid for the film, what is the message? And that is because many people can’t believe that you have somebody who is just curious about things, who might have his opinions, but who is not trying to do an artwork to comfort his opinions.

If you do that definitely it is not proper documentary filmmaking but rather some kind of propaganda.

What I want to achieve is to give my audience the possibility of an insight or to understand better some stuff, but it is more to tell the story.

Take us through one of your most popular feature documentary – when Paul Came Over the Sea?

I began my research on the external borders of the EU back in 2011, quite some time before the term “migrant crisis” was coined by the European media.

My working title at the time was “Europe’s Borderlands” and I met border guards and refugees in Greece, Turkey and Malta, visited a refugee camp in Tunisia, drove to the Polish-Ukrainian border and went to the FRONTEX headquarters in Warsaw.

My focus was rather on the view from inside, from a European perspective, somehow a border guard’s perspective. But when I met Paul in 2014 – a migrant from Cameroon – in the forests near the city of Nador in Morocco I changed my plans.

Paul’s story became the core of the film.

There was no big idea really but to tell the story about borders, whether they are necessary, what do they mean and why they are as protected the way they are.

Paul’s story is a common story of many immigrants. Do you think immigration is actually a crisis?

It is true Paul’s story is a common story of immigrants and it is not an African story that many people think. It has a universal appeal and that tells you that immigration is a global problem, not an African problem.

When I was premiering the film in Thailand, everyone could easily relate to the movie. In Brazil, China – which has a lot of internal migration is the same, and Canada, it was the same.