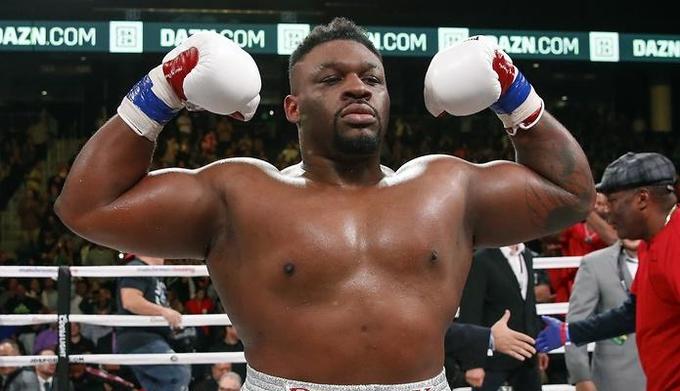 Heavyweight contender Jarrell “Big Baby” Miller will no longer be fighting got the biggest price money of his career and the opportunity to win three world titles after he failed a drug test two months before his showdown with Anthony Joshua of Britain in his first professional fight outside of the UK. Miller had ran into several problems before his drug failed test result was released to the public. He was already denied a boxing license earlier last month in New York for a world title fight because of a positive test for a banned substance. Then came the shocker that he has failed a second and third test for other banned substances, sources with knowledge of the test results told the press.

The results from a blood sample collected from Miller by the Voluntary Anti-Doping Association on March 31st came to light late last month and were positive for human growth hormone (HGH), which is on the World AntiDoping Agency banned list. A urine sample also collected on March 31 returned positive results for two additional banned substances, EPO, which increases the oxygen-carrying capacity of blood, which would help a fighter from showing fatigue late in a fight, and GW1516, which an athlete might use to assist in fat loss or as an endurance booster. “Salita Promotions and Greg Cohen Promotions are very disappointed in these findings and feel awful fight fans will be deprived of what would have been a great fight,” Dmitriy Salita and Greg Cohen, Miller’s co-promoters, told the press in a joint statement following the revelation of the positive test. “It’s a terrible outcome and unfortunate situation for all parties involved.”

Earlier, results from a urine sample Miller provided to VADA on March 20 also tested positive for the banned substance GW1516. The New York State Athletic Commission denied Miller a boxing license, all but ending his hope of being able to challenge unified heavyweight world titlist Anthony Joshua on June 1 on DAZN at Madison Square Garden in New York. Miller (23-0-1, 20 KOs), 30, of Brooklyn, New York, has asked for the B sample from the March 20 test to be tested, and it will be on April 24. While Joshua promoter Eddie Hearn of Matchroom Boxing is looking for a new opponent, Miller could conceivably save the fight, but only in the extraordinarily unlikely event that the B samples from each sample are negative which is nearly impossible now. However, Hearn said he is moving on. “To be honest I can’t believe it. You always want to give an athlete the benefit of the doubt, but this leaves no doubt,” Hearn told the press. “It worries me that fighters feel the only way they can beat AJ is by taking banned substances. One thing we know is Miller is out. AJ’s new opponent for June 1 will be announced this month. Clean fighters only need apply.”

Hearn has been talking to various candidates to replace Miller to challenge Joshua (22-0, 21 KOs), 29, the British superstar, who is due to make his United States debut and his seventh title defence. Big Baby’ Miller failed three drug tests before match up with AJ www.thevoicenewsmagazine.com 65 HGH, which is usually given by injection, is used by athletes to increase lean muscle mass and also to help in recovery. It is not detectable by a urine test, but blood testing has been developed in recent years to find it. It is also a substance that typically remains in humans for only about 24 hours. After the first positive test result, Miller claimed he had not knowingly taken a banned substance.

“I am absolutely devastated upon hearing the news my boxing license has been [denied] in NY State and I will be vigorously appealing this decision,” Miller wrote on social media last month. “I have NEVER knowingly taken any banned substance and when I found out the news I was totally shocked. My team and I stand for integrity, decency & honesty and together we will stand to fight this with everything we have!” The positive test for HGH is the third positive test of Miller’s combat sports career. In 2014, when he was participating in Glory kick boxing, he tested positive in a urine sample for the banned substance methamphetamine after a decision loss to Mirko Cro Cop.

The California State Athletic Commission suspended Miller for nine months and fined him $2,500. Getting dumped from the fight with Joshua will cost Miller a career-high purse of $4.875 million. He was also due to earn additional money from a percentage of the pay-per-view profits from the fight on Sky Sports Box Office in the United Kingdom. In addition, Miller will lose out on at least another $3 million because his deal with DAZN called for two $1.5 million comeback fights in the event of a loss to Joshua. The biggest purse of Miller’s career was a little over $500,000 for his fourth-round knockout of Bogdan Dinu on November 17th 2018.

Jarrell Miller says he “messed up” after reported drug test failures forced an upcoming fight with Anthony Joshua to be scrapped. In a contrite video message posted on Instagram, Miller said it was “time to do right” and pledged to “come back better”. Miller’s participation for the New York heavyweight bout on June 1 was already under threat after the Voluntary Anti-Doping Association (VADA) informed both camps of an adverse finding in a drug-testing sample, leading to him being denied a licence for the date at Madison Square Garden. Miller retained the right to request a further sample and to reapply for that licence to challenge Joshua in what will be the champion’s US debut. However, Anthony Joshua’s camp is searching for a new opponent says Eddie Hearn

However, a second doping violation by Miller meant that fight was off the cards, promoter Eddie Hearn said. Responding to the initial adverse finding, Miller had written on Instagram he had “never knowingly taken any banned substance and when I found out the news I was totally shocked”. But when the two other results came back positive, he struck a different tone, telling fans: “I messed up. I made a bad call. [There were] a lot of ways to handle the situation, I handled it wrongly and I’m paying a price for it. “I messed up a big opportunity and I’m hurting on the inside. My heart is bleeding right now – I hurt my family, my friends, my team, and my supporters. “But, I’m owning up to it. I’m going to deal with it. I’m going to correct it. I’m going to come back better and I’m humbled by the experience.” Miller said boxers “go through a lot” and he did not want to give his fellow fighters a “bad name”. Anadverse finding for GW1516, a metabolic modulator also known as cardarine and endurobol, was made in a sample on March 20th.

Anthony Joshua v Michael Hunter to be confirmed for June 1 2019 ...