Mothers in Tunisia denounce ‘Arbitrary arrests’ of their children

Africa cheers as US returns to the World Health Organization

Advice to Africans: Don’t send your children to study in the West

My husband died in SARS detention over N200 airtime – Widow

No Result
View All Result

Too little rainfall and then too much has paired with coronavirus impacts in Central Africa, leaving growers struggling

Tomato farmer Gregory Ngwana is used to good years. But this season, wild weather – too little rainfall and then too much – has paired with Cameroon’s coronavirus lockdown to slash harvests, make transport difficult and drive away buyers.

“I cannot earn enough income for my family, not to speak of recovering the money to repay loans incurred to invest in my tomato farm this season,” the 45-year-old from the town of Soa, north of Yaounde, told the Thomson Reuters Foundation at Mokolo market in the capital.

“This is the first time we are having a double crisis: weather disappointment and the coronavirus lockdown,” Ngwana said.

Thousands of other small-scale tomato farmers in Cameroon similarly are facing huge losses from what had been a thriving business – one promoted by Cameroon’s government as a way to boost incomes.

“Agriculture is one of the key mainstays of our economy – the reason we are putting in every effort to promote rapid-yield food crops like tomatoes and vegetables,” Minister of Agriculture and Rural Development Gabriel Mbairobe told an online government meeting last month.

Farmers say a lack of rain in the traditional planting period in March – a problem believed linked to climate change – cut harvests.

When rains finally arrived, they were too heavy, leading to crop losses and rapid spoilage, farmers said. Then, what they were able to pick turned out to be difficult to sell, with COVID-19 lockdowns hitting transport and cross-border trade, and sharply driving down prices.

Mary Azong, a tomato farmer in Yaounde, said her production had dropped from 20 tonnes this time last year to just 8 tonnes this year.

“This is making it very tough for me and my family to cope,” she said.

Farmers said the price of a 20-litre container of tomatoes had dropped by three-quarters compared to last year.

Environment experts said extreme weather this year was taking a heavy toll on the crop.

“Tomatoes are sensitive to heavy rains. They get rot faster with heavy and prolonged rains,” said Zachee Nzoh Ngandembou, CEO of the Centre for the Environment and Rural Transformation, (CERUT), a sustainable development non-profit.

“Weather extremes linked to climate change are a major cause for concern,” he said. 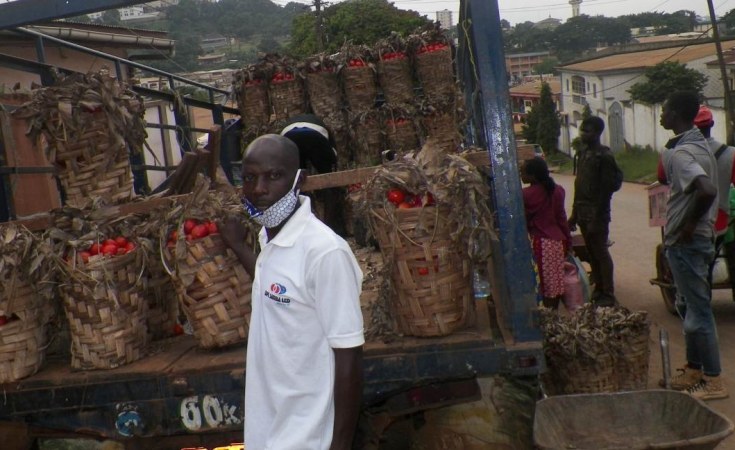 A tomato vendor sells baskets of his crop from a truck near the Mokolo market in Yaounde, the capital of Cameroon, July 9, 2020.

Farmers also have struggled to get their harvest to market on badly maintained, mainly dirt roads rendered impassable by rain, he said – a particular problem for a perishable crop like tomatoes.

Both Cameroon’s government and farmers say closure of borders between the country and Nigeria, Gabon and Equatorial Guinea since mid-March, as a result of COVID-19, has worsened the country’s tomato crisis.

Ngwana said he normally sells more than 80% of his harvest in large-scale lots to buyers from neighbouring countries. But those buyers no longer are coming, he said.

“We now have local consumers who more or less buy in small quantities just for family consumption,” the grower said.

To try to sell their harvest before it spoils, some farmers near cities like Yaounde have turned to door-to-door sales, offering produce at prices nearly 90% below former market rates, Ngwana said.

While bad news for farmers, that has been good for urban buyers, who can’t always afford tomatoes.

This year, “even the poor can put good tomato sauce on their table more regularly,” noted Yaounde resident Angela Ebong, a seamstress.

Cameroon has seen more than 17,000 cases of the coronavirus this year, with over 390 deaths.

Mbairobe, the agriculture minister, said the government hoped to increase support to tomato farmers to compensate some of their losses.

As part of the country’s 2035 development plan, aimed at boosting economic growth and reducing poverty, over 12,000 young people have gotten government support over the last five years to begin growing tomatoes or other vegetables.

Official statistics put tomato production in Cameroon at about 878,000 tonnes in 2019. Estimates for this year’s harvest have not been released.

But farmers – especially women and young people who earn their main income growing tomatoes – say they will need state subsidies to stay in business after this hard year.

“We think we deserve some financial support from the government in periods like this, and not just promises as announced by the minister of agriculture,” said Michael Ajang, a member of the tomato vendors’ association in Yaounde.

Also Read:   Nigeria to host World Summit for single market in Africa in 2021 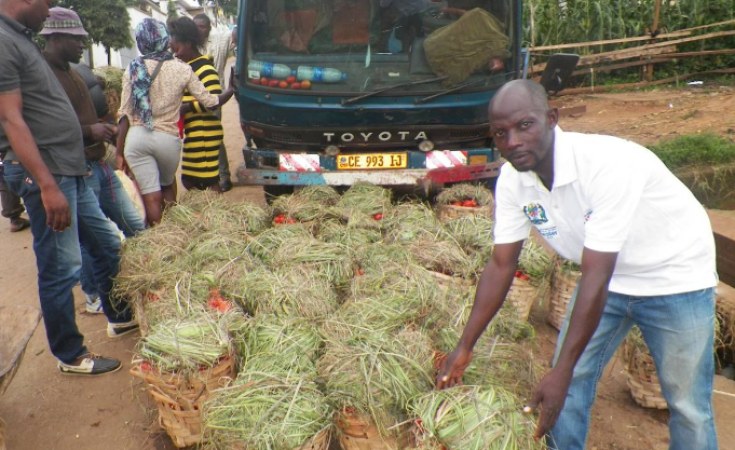 A tomato vendor offers baskets of his crop for sale at the Mokolo market in Yaounde, the capital of Cameroon, July 9, 2020.

Losses this year may also discourage others from taking up tomato farming, they said.

“I am not sure those farmers – especially the youths who are delving into the tomato business for the first time – will want to continue after such a regrettable experience,” said Bernard Njonga, president of the Association for the Defence of Farmers Collective Interests.

He said the government had neglected or mismanaged many of the country’s meteorological stations, meaning farmers could not get accurate and timely climate and weather information to make informed choices about their crops.

“It’s regrettable that a lead food-producing country in (Central Africa) like Cameroon lacks basic infrastructure to help farmers fight against the effects of climate change and improve their livelihoods,” Njonga said.

A government official, however, said the country has since 2016 made strides toward better maintaining about 43 meteorological stations across the country.

“It is normal for infrastructure to wear out over time. But the government makes sure these structures are rehabilitated to permit continuous functioning,” Philippe Richard, director of meteorology in the country’s Ministry of Transport, told the Thomson Reuters Foundation.

Cameroon is struggling with widespread food insecurity, according to a 2019 report from the United Nations Food and Agriculture Organization, particularly in the drought-hit north and crisis-prone northwest and southwest regions.

This year’s tomato crisis in Cameroon makes clear the need for more food processing infrastructure in the country – something the government had promised to deliver under its climate action plan under the Paris Agreement on climate change, farm experts say.

Improving food processing “will not only add value to farmers’ production and income but would spare them the trouble of intense losses during extreme climate disasters,” Njonga said.

(Reporting by Elias Ntungwe Ngalame; editing by Laurie Goering. The Thomson Reuters Foundation is the charitable arm of Thomson Reuters, and covers the lives of people around the world who struggle to live freely or fairly. Visit http://news.trust.org/climate)

Mothers in Tunisia denounce ‘Arbitrary arrests’ of their children

No Result
View All Result