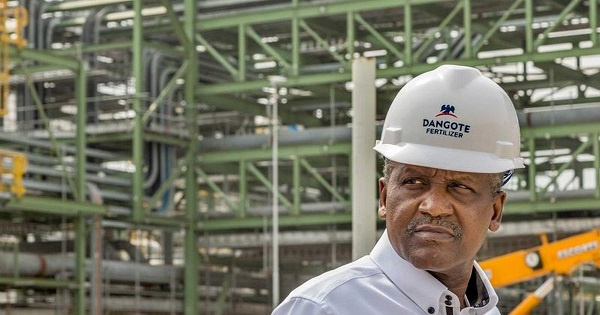 Dangote Group’s fertilizer plant, now under construction in Nigeria’s biggest city of Lagos, will be ready to start production late this year, according to Saipem SpA, the builders.

Owned by Aliko Dangote, Africa’s richest man, the facility located in the Lekki district of Nigeria’s commercial hub, has a name-plate capacity of 3 million tons a year of urea and ammonia, making it the world’s biggest. It is in the vicinity of a 650,000 barrels a day Dangote oil refinery also under construction.

Test runs started at the plant in March, though they were hampered by the disruptions that came with the coronavirus pandemic, said Maurizio Coratella, chief operating officer of Saipem SpA.

“Train two commissioning and testing will start soon, as such activities will be overlapped with train one,” Coratella said. “The project is planned for completion within the end of 2020, with train one starting production within weeks and train two following soon after.”

Saipem is making special arrangements, including setting up dedicated flights for vendors and suppliers to enable it meet the completion deadline, he said.
‘Big LNG’

Also Read:   Just Skirt presents Business Seminar for would be entrepreneurs in Amsterdam.

Saipem’s operations in Nigeria, where it’s been in business for more than 50 years, span several industries including oil, gas and power. Among its four major construction contracts currently running in the West African country, it expects a 430-megawatt power plant being built for Eni SpA in the southern delta region to start operating within weeks.

The company is among bidders for Royal Dutch Shell Plc’s Bonga offshore oil-field expansion and is also in the early stages of revamping state-owned refineries in the oil-industry centers of Warri and Port Harcourt, Coratella said.

Four refineries with a combined capacity for 445,000 barrels of crude run by Nigerian National Petroleum Corporation are shut for refurbishment and only due back in production in 2023.

Saipem is among three joint ventures that bid for engineering work for Qatar’s liquefied natural gas expansion project. The firm and its partners who won a $4 billion contract to build Nigerian LNG Ltd.’s train 7 project, is eyeing “big LNG” and petrochemical projects in Southeast Asia, the U.S. and Russia, Coratella said.

“In terms of opportunities, most of them have been delayed to 2021,” he said.