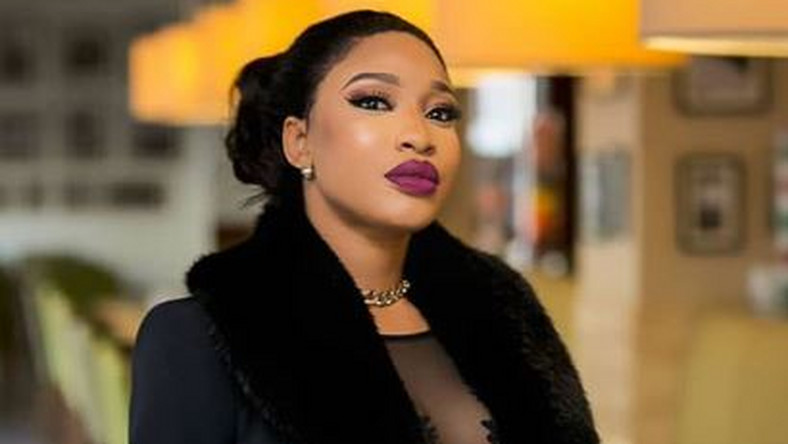 Mired in controversy and steeped in scandal, she doesn’t seem to give a hoot! Not long ago, she was linked to former Super Eagles star, Daniel ‘The Bull’ Amokachi.

However, ‘King Tonto’ as she prefers to be called, debunked the talk of love with the ex-international star. Nevertheless, recent developments suggest that something “strong” is happening between King Tonto and The Bull, writes Ferdinand Ekechukwu

Nollywood diva Tonto Dikeh is no stranger to news making. In fact, hardly is there a season without the beautiful actress in the news, trending for whatever reason. Such has left her with the toga “controversy”. Unfazed by that, the single mother of one has gained more popularity for her lifestyle and social media engagements than her showbiz career.

Recently, pictures and video of the Nollywood actress with ex- football star, Daniel Amokachi, made the rounds on a Thursday evening on the social media. The pictures and video which was first posted on her Instagram page showed Amokachi and Tonto on a date dining and later dancing to a live jazz tune from the famous Titanic movie soundtrack by Celine Dion.

Others who were at the scene cheered them. Tonto had tagged the posts with the caption “#Thebull X #Kingtonto.” “Dinner with The Bull at the newest/best Chinese restaurant in town.” The ex-international would then reply her saying: “Was a pleasure hanging out with The King @tontolet It was a good shoot… keep representing.”

No sooner than she posted the stuffs that it gained traction online. Tonto Dikeh looking stunning and beautiful in her short yellow gown outfit on the date wore a smile that literarily lit up the room. While ‘The Bull’ reciprocated her every gesture, the chemistry appears to be really strong as both stars left much to be desired. It is unclear if Amokachi is still married to the Tunisian woman who had twin sons for him, named Kalim and Nazim. The boys are following his footsteps in becoming footballers.

On the part of Tonto, since she separated from her estranged husband, Olakunle Churchill, the Nollywood diva has been going on with her life, even though, hardly a week passes without her discussing issues around the man. While the screen star and singer has successfully kept a secret the man in her life, her recent posts had got people speculating that she is in a relationship with The Bull.

The Ikwere (Rivers State) descent reacted to the speculation thus: “That is very funny. He is married and has children and he has a family. We are ambassadors to a new restaurant; actually the biggest Chinese restaurant in Africa just came to Nigeria. So we are ambassadors filming.”

Not long afterwards and in what appears to be a new twist to her relationship status, Tonto took to Instagram to call out some celebrities while revealing she has a new man. In the post, the controversial actress threatened a number of entertainers and she didn’t hesitate to mention their names.

She wrote: “Dear Nollywood and music industry, I am in a new relationship now and, to God, if I see anyone of you begging him money, begging him to sponsor your shows or movies… I will mess you up and your whole life!!”

With her denial and revelation about a certain man in her life, one is forced to ask who truly the new man in her life is. Is she really ready to love again? Is she really ready to give another attempt at marriage? Would the new man be able to cope with all the drama surrounding her week in week out? From allegation of her ex’s car sales to their child’s custody, the delectable showbiz persona sure packs a handful of issues to contend with.

Recall in the past weeks, the social media went agog, over the Nollywood actress interview with popular On-Air-Personality (OAP) Daddy Freeze, which went viral for a number of reasons. In the video, Tonto Dikeh had called her ex-husband a liar, for alleging that only four people had attended their wedding, which she sponsored. But what gave the interview much grip was the know-how actress’ audacity in calling her ex-husband a 40 seconds man in bed.

Within hours, cartoons were created, praising the 40 seconds man, a strong man for being able to father a child with less than one minute action, while she was judged a frustrated ex-wife who wouldn’t let her ex-husband be despite that he had lost the custody battle of their three year old son to her. She was judged for being desperate to get married, to the point of using her personal funds to pay for her dowry and even buying the clothes and shoes, he (Churchill) wore to their wedding.

Much ado was given to the actress by both men and women, some who suffered terrible domestic violence, frustrated marriages and some who even had less than 40 seconds in their own matrimonial beds, yet all was forgotten to judge, the spirited King Tonto!