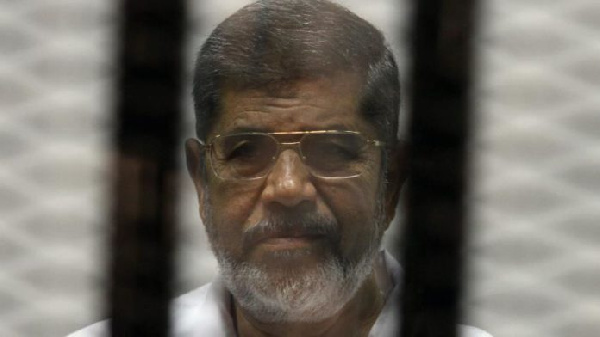 Mohamed Morsi’s son posted on his Facebook page on Tuesday, saying his father has been buried alongside other senior figures of the Muslim Brotherhood in Cairo.

The burial was attended by members of the family in Cairo’s Nasr City after authorities refused burial in Morsi’s home province of Sharqiya in the Nile Delta, Ahmed Morsi said.

“We washed his noble body at Tora prison hospital, read prayers for him at the prison hospital … and the burial was at the Muslim Brotherhood spiritual guides,” Ahmed wrote.

Morsi died on Monday from a heart attack after collapsing in a Cairo court while on trial on espionage charges, authorities and a medical source said. He was 67.

Morsi, a top figure in the now-banned Muslim Brotherhood, had been in jail since being toppled by the military in 2013 after barely a year in power, following mass protests against his rule.

His death is likely to pile international pressure on the Egyptian government over its human rights record, especially conditions in prisons where thousands of Islamists and secular activists are held.

It said Morsi had fainted after a court session and died afterwards.

Morsi, a top figure in the Muslim Brotherhood, was toppled by the military in 2013 after mass protests against this rule. He had been serving a seven-year sentence for falsifying his candidacy application for the 2012 presidential race.

In March 2018, a panel of British politicians and lawyers warned that Morsi’s prison conditions were poor and could lead to his early death.

Morsi had also complained about being denied treatment for diabetes.

An engineer by profession, Morsi’s short time in office marked Egypt’s brief experiment with democracy. As analysts began to tout his tenure as a success for the Arab spring, the army struck effectively snatching the country back from civilian.