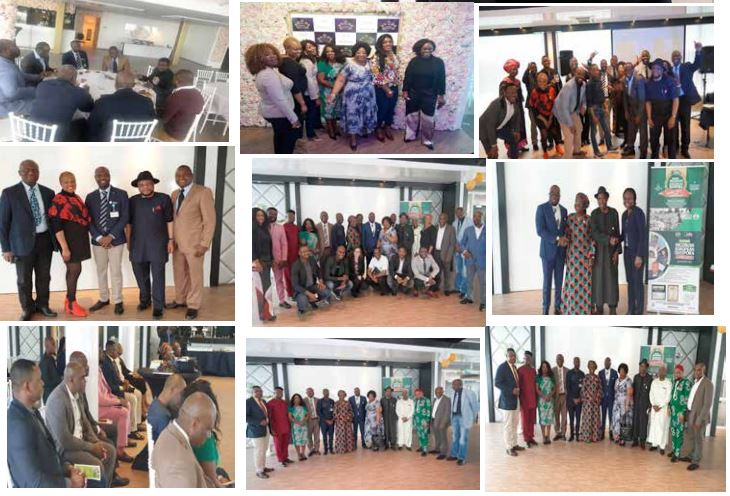 Nigerians from Europe, Middle East, the US and Africa gathered from the 25th to 27th of April 2019 at Royal Event Center to participate at the 2nd Nigerian Global Diaspora Conference. The event is a follow-up to London 2018, when Nigerians from across the globe gathered last July in London to establish a template for an increased Diaspora engagement in Nigeria’s development. Speaker after speaker emphasized the need for the Diaspora to unite so that their representative body, the Nigerians in Diaspora Organization (NIDO), could become more effective. Honorable Kenneth Gbandi, the Chairman of the Nigerians in Diaspora Organization Europe (NIDOE), explained that there was a lot of misconception about the function of NIDO. He said the body was the officially recognized platform for the engagement of Nigerian professionals in the Diaspora in the development processes of their homeland. Honorable Gbandi, a Germany-based media entrepreneur, policy consultant and politician, appealed for increased support of Nigerians for NIDO so that it could better represent their interests and contribute more effectively to national development. “We all care about the situation of our dear homeland; NIDO is the opportunity for us to positively intervene in its development,” he emphasized. Among those who spoke at the opening ceremony are Pastor Elvis Iruh, a Netherlands-based clergyman, publisher and entrepreneur; Mrs. Grace Obar, a UK-based chartered accountant and development activist; Mrs. Vire Komolafe, Ireland-based health care specialist and NIDOE scribe; Engr. Cornelius Obot, Netherlands-based IT expert and ViceChairman of NIDOE, Pastor Duncan Spier, a friend of Nigeria and Solar Energy Expert and Mr. Femi Awoniyi, publisher of African Courier based in Germany and a media consultant for NIDO Europe among others. Top of the agenda at the ongoing conference are: – Enrolment of Diaspora Nigerians in the National Identity Management System – Clamour for Diaspora Voting Rights – A Diaspora Agenda for the Nigerian Diaspora Commission – Diaspora and Irregular Migration. On day 2 of the conference, Nigerian Ambassador to the Netherlands, Ambassador Orji Ngofa spoke passionately about Nigeria and what role the Diaspora could play in its advancement.

He called on his countrymen and women living in the Diaspora to get more actively involved in the affairs of their home country. “You’re the future of Nigeria, without you Nigeria has no future,” the ambassador said. Ambassador Ngofa advised Nigerians abroad not to be deterred by the problems in the country, as there were plenty of opportunities for those with good ideas for the country. He described the conference as an opportunity to reflect on the challenges facing Nigeria. In his speech, Alhaji Abdul Bin Rimdap, Nigeria’s former ambassador to Germany and Austria, praised the Nigerians in Diaspora Organization (NIDO) for its efforts to contribute to national development and spoke about his engagement with the organization since its inception. The retired career diplomat launched his book “Confidence in Diplomacy”, on his more than three decades in the diplomatic service of Nigeria that took him to Pakistan, Zambia, Austria and Germany, at the event. Kenneth Gbandi, the Chairman of the Nigerians in Diaspora Organization Europe (NIDOE), praised Ambassador Rimdap for his immense support for NIDOE during his tenure as envoy and in retirement. Gbandi also talked about the achievements of the organization since his assumption of office in 2016, including the floating of the Diaspora Housing Investment Fund, holding the first-ever Nigerian Diaspora Global Development Conference in July 2018 and the increased visibility of the body. Other speakers at the event include Dr Badewa AdejugbeWilliams, who represented Hon. Abike Dabiri-Erewa, the Senior Special Assistant to the President on Foreign Affairs and the Diaspora; Adetunji Adeleke, President of NIDO Americas (Indiana); and Patience Mayaki-Van der Horst, who is running for a seat in the European Parliament from the Netherlands on the platform of the Christen Unie/ SGF. Mrs Adejugbe-Williams, who is the founder of the Abuja Film Village and Convener of the Nigerian Diaspora Investment Summit, advised Nigerians abroad to use the opportunity of the ongoing enrolment to register, which will fasten the process of securing their voting rights. Mr Adeleke called for unity among Nigerians in the Diaspora so that they could work together better for the progress of their homeland. Panel discussions were held on the ongoing enrolment of Nigerians abroad in their country’s national identity management system and the efforts being made for the enactment of a legislation that will make it possible for Nigerians outside the country to vote at elections. Panelists also talked about the energy crisis in Nigeria and the way out.

The participants after the day one session went on a boat ride at the central city of Amsterdam to see the historic sites of the country as part of the program on the 3-day conference. On Saturday, 27th April, 2019, more presentations followed with former chairman of NIDOE Europe, Hon Collins Nweke who presented a paper on Diaspora & Diaspora Commission: Which way forward. The 3-day event is a follow-up to London 2018, when Nigerians from across the globe gathered last July in the British capital to establish a template for an increased Diaspora engagement in Nigeria’s development and governance processes. The very successful event was rounded off with an Award/Gala night where various Nigerians were recognized for their contributions to the advancement of the country and the NIDOE organization.

Chelsea’s two-window transfer ban has been upheld by FIFA