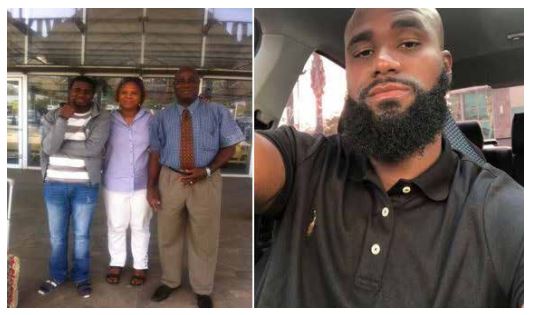 Late Oluwafemi Emmanuel Fayemiwo with his “wife” Maria Earl and their grandson, Noah who came to life in December 2018. Maria Earl told authorities that Femi died of suicide, but available facts point to homicide. But we are waiting for investigators to arrive at their final result. But my son was not suicidal. These are the words of Dr. Moshood Fayemiwo whose second son, Femi was reported dead in April and the first announcement stated that Femi had committed suicide. Our publisher, Pastor Elvis Iruh put a condolence to him at his resident in Texas, USA and the first reaction from the mourning father is this: “My second son, Oluwafemi Emmanuel Fayemiwo would not have died, if he had listened to wise counsel. He would still be with us if his mother; Adeola Adefeso had not pushed him to the extent that every fatherly advice and entreaties I gave to my son would always be countermanded by this woman. Here is a woman I have left nearly fifteen years ago; she went ahead to marry twice, but both marriages crashed” While probed further to know why he is holding his ex-wife responsible for their son’s death, he has this to say. “This woman; Adeola kept assuring me nothing would happen to our son.”Nothing would happen to Femi, Mariah cannot do that; nobody can kill my baby,” she retorted rather dismissingly. I told her we’re not talking of voodoo here, but the prophecy of the Lord Jesus Christ. Instead of Adeola to reiterate what I told my son to do-relocating from California to Texas-to stay off the impeding tragedy, she told our son not to mind me his father, but should stay in the abusive and dysfunctional marriage to “work it out.”

The father confirmed that he was in constant touch with his son via the telephone, and according to him, his son, Oluwafemi Emmanuel Fayemiwo kept telling me over the phone: “Daddy, Maria is planning with people, her friends to kill me.” I said the Holy Spirit had shown me too; so why not go and report at the local police station at the Marine Base in California. He said they would not believe him. So I asked him: “Is there any life insurance policy on your life?” To my astonishment, my son replied that; “Yes, Daddy, if I die, Maria Earl stands to collect $200,000.00 (Two Hundred Thousand Dollars) life Insurance.” I told Femi that would be the trigger and he should get out of Dodge quickly and fast. Again, his mother called from Tampa, Florida and countermanded my fatherly advice. “Daddy, mummy said I should stay in the marriage and work it out.” I called the mom in Tampa, Florida once again; she shouted and said nothing would happen. The next thing I heard was on Facebook where Adeola flew our son, Mariah Earl and their new born-baby; Noah from California to Tampa. They were all decked in Yoruba attire smiling as shown in the pictures published on facebook. I was aghast. I lost it. But what could I have done but pray. Yet, there are numerous times wisdom and obedience to the warning of the Holy Spirit supersede prayers.

So how did you know about your son’s death? “Last Tuesday morning, Adeola called me from Tampa, Florida to inform me that our son, Oluwafemi Emanuel Fayemiwo had died. I wanted to know how and why; albeit I had been shown as earlier stated. She said Maria Earl called her that Tuesday morning from the US Marine Corps Base Camp, Pendleton near Oceanside California that our son had committed suicide. I told her, No Way, Femi could not and would never commit suicide. He was killed by Maria Earl and her acolytes. It was a case of homicide and the reason was the $200,000 (Two Hundred Thousand Dollars) Life Insurance Maria Earl stands to collect from Femi’s death. I have called Maria Earl twice, she has not returned my call, and because she knows I knew how and why my son died. Thereafter, I made frantic efforts to talk to the mortuary people in Oceanside, CA where his body was deposited. They told me they are still investigating and we wait.

Oluwafemi Emmanuel Fayemiwo was born in 1993 in Lagos, Nigeria, immigrated to the United States of America with his parents, and served in the marine where he met his wife and they had a son together but it was a difficult marriage with accusation of immorality from Femi against his wife. He died mysteriously on 4th April 2019. He has since been buried but investigations continue on his death.

The final journey of ex-marine officer, Oluwafemi Emmanuel Fayemiwo allegedly murdered in California last month came up at Tampa Florida on Friday April 19, 2019. The funeral ceremony took place at Blount & Curry Terrace Oaks Funeral Home and Crematory 12690 N. 56th Street Funeral Home in Temple Terrace, FL 3361 where family and friends came to say goodbye to him but this seem the beginning of the story as the father of the deceased, Dr. Moshood Ademola Fayemiwo, of Cameron Texas, USA has refused to accept the earlier report by his son’s wife that Femi committed suicide. Please read the story on the side page. Our sincere condolence to the bereaving families particularly the father, Dr. Fayemiwo who happens to be a former boss to our Publisher, Pastor Elvis Iruh.

“My son was murder by his strangled wife over 200,000 dollars insurance claim”

On the death of Femi Fayemiwo, I share in the grief of the parents of a Young man gone at 26 leaving behind a Young son who will not grow to know is biological father. More painful is the accusation that he has been murdered by his own wife, although we do not have evidence to support this claim as investigations continues on the matter. One person that has no doubt what has happened is the father of the deceased, Dr. Moshood Fayemiwo. He categorically told me ‘my son was murdered by his wife, for the 200,000 dollars insurance claim on my son’s life”. He told me that there was already cracks in the marriage and he pleaded with his son to flee from the marriage but he did not listen that he would work things out with his wife. This story is personal to me, I know this Femi even though as a Young boy, I used to drive him in his father’s car to school as a kid, and he was my Publisher son. He was quite, gentle and easy going, of course he grew into a man, who went into America marine corps, served United States of America and then fell in love and got married.

This is the little of him that I know, I went through his Facebook page and postings, he did not display any sign of a man who was distressed and capable of taking his own life, he had his Elder brother, Father and mother. He was communicating excellently with them despite the divorce of his parents. He was full of life and from the blues, the news came that he has taken his own life. No suicide note or any message of distress call for help. The Father suspect a foul play in his death and he has vowed to pursue this matter to get justice for his son. “I would never belief that my son committed suicide, they need to show me evidences that points to that”. He actually warns parents who have Young adult children who marry foreign women in America to be more vigilant because of mysterious deaths like this is becoming common and most times, it is one of the spouse responsible for the death of the other.

We would keep an eye on the investigation and update you if there is any evidence to the allegation so the bereaved father. Until then, we keep the sweet and good memory of Late Oluwafemi Fayemiwo.

Mother who killed her daughter’s raper set free by the court in ...