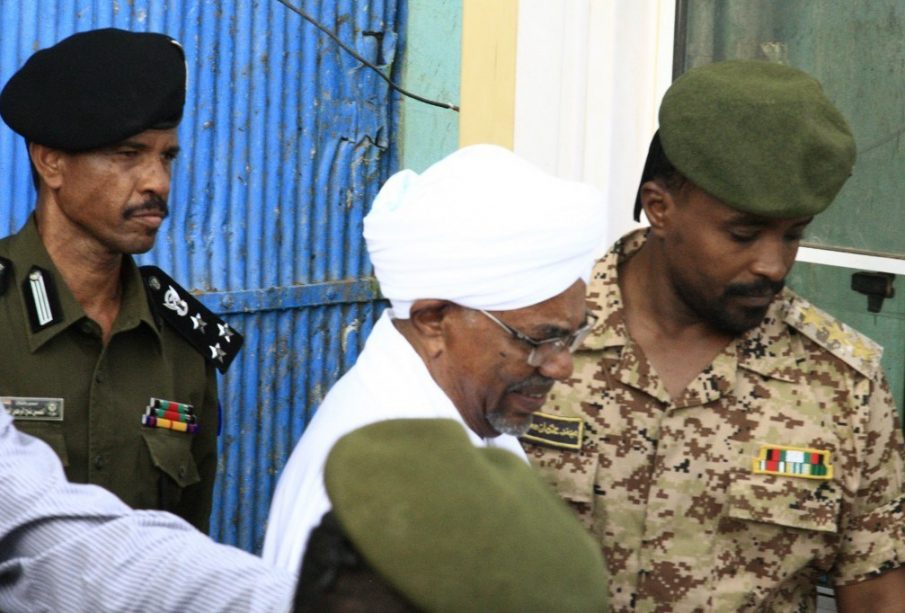 Fallen Sudanese leader Omar al-Bashir was Sunday seen in public for the first time since being ousted, as he was driven in an armed convoy to the prosecutor’s office. The former strongman, who ruled his northeast African nation with an iron fist for three decades, was toppled on April 11 after weeks of protests against his reign.

Dressed in a white traditional robe and turban, Bashir rode in a heavily-armed convoy from the notorious Kober prison in the Sudanese capital Khartoum to prosecutors’ office to face charges of alleged corruption.

Prosecutor Alaeddin Dafallah told reporters after Bashir left the office that the ousted president had been informed that he was facing charges of “possessing foreign currency, corruption and receiving gifts illegally.”

Meanwhile, a top general from the country’s new ruling military council vowed that those who carried out a deadly crackdown on an iconic protest site that left dozens dead earlier this month would face the death penalty. “We are working hard to take those who did this to the gallows,” Mohamed Hamdan Dagalo, deputy chief of the ruling military council said in a speech broadcast live on state television.

“Whoever committed any fault” will be held accountable, Dagalo added. Thousands of protesters who had camped outside Khartoum’s military headquarters for weeks were violently dispersed by armed men in military fatigues on June 3, according to witnesses.

More than 100 people were killed that day in Khartoum, according to doctors linked to the protest movement, while the health ministry put the nationwide death toll at 61.

Protesters and witnesses accuse the feared paramilitary group led by Dagalo, the Rapid Support Forces, of carrying out the assault on demonstrators. Demonstrators and US officials have called for an independent probe into the crackdown.

On Thursday, the military council spokesman General Shamseddine Kabbashi expressed “regret” over the crackdown. But the council insists it did not order the dispersal, saying it had actually planned to purge an area near the protest camp where people are said to sell drugs.

“The planning of the operation of Colombia (area) was done by military and security authorities,” the council said in a statement late Saturday. “We assure you that the council is keen to investigate minute by minute facts through its investigation committee.”

Brigadier Abderrahim Badreddine, a spokesman for the investigative committee, told state television Saturday initial findings indicate that “officers and soldiers of different ranks and regular forces” had entered the sit-in without any orders from their superiors.

As calls for an independent probe grew, Arab League chief Ahmed Aboul Gheit visited Khartoum on Sunday where the military council said he met its chief General Abdel Fattah al-Burhan. Bashir had swept to power in an Islamist-backed coup in 1989.

Sudan suffered high rates of corruption during his rule, ranking 172 out of 180 countries in Transparency International’s 2018 Corruption Perceptions Index. When he imposed a state of emergency on February 22 in a bid to quell protests that erupted in December over the spiralling costs, Bashir issued a decree making it illegal to possess more than $5,000 in foreign currency.

But in April, military council chief Burhan said more than $113 million worth of cash in three currencies had been seized from Bashir’s residence after he was toppled. A team of police, army and security agents found seven million euros, $350,000 and five billion Sudanese pounds