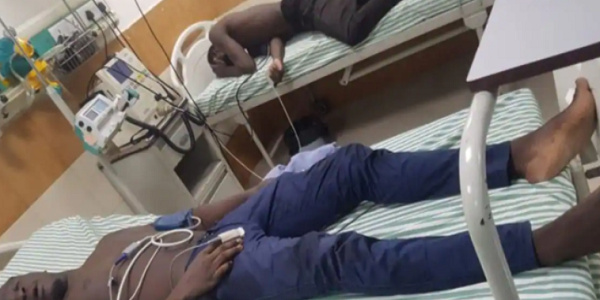 African students at the Roorkee Institute of Technology, Uttarakhand, India, have decried the maltreatment of two of their colleagues by the management of the institution.

According to India.com, Ibrahim (Nigerian) and Benjamin (Ghanaian) were mercilessly beaten on the college premises last week, leaving them injured after the two went out for dinner without a pass.

It was gathered that the school administration had not granted passes since March due to the coronavirus pandemic.

A local source said, “Students faced problems after they ran out of money. They use to have their meals in the college canteen, but the manager stopped providing food after the student failed to pay. They wanted to go to their friends’ homes but the college administration did not give permission. They stepped out and upon their return got into a fight with guard and later college administration called goons to beat them up. They were badly beaten up and people recorded videos too.”

In the viral videos uploaded by the students, the guards numbering up to 20 were seen dragging and thrashing the two black students.

Speaking to the Indian News Agency, Benjamin said, “They dragged Ibrahim from the second floor to the ground floor. They hit me with bamboo sticks. Then the police arrived at the spot and rushed us to a hospital.”

He said the school management hired the men from a private security guard agency, Hawk Commando, to forcefully remove them from the campus after the police had advised the administration against it and asked them to take it up with the relevant embassy.

But locals, the National Students Union of India, and other activists have staged protests outside the college gates in solidarity with the victimised black students with many of them lamenting that this is coming at a time when many thought black lives were beginning to matter.

Some of them have also taken to social media to voice out their grievances.

@LicypriyaK stated, “Two African students were beaten at Roorkee Institute of Technology by calling out from hostel on 15 July. With the support of over 200 Indian students, we filed an FIR. I strongly condemn the incident. #BlackLivesMatter”

@VivekPalyal wrote, “I am ashamed that I studied from this college. Pls have a look at how international students were beaten up brutally at this college.”

@Pakfirst2 wrote, “India is one country in the world where African students and citizens continuously face racial slurs, targeted by extremists gangs, publicly abused and beaten. Racism is ingrained in Indian outlook. Hundreds of ugly incidents to date.”

@ayush11shakya said, “What the hell is going on in this college that guy was beaten by some security guards. This is mob lynching when all the college staff management was there and no one can came to help these students.”

When contacted by The PUNCH, the Chairman of the Nigerians in Diaspora Commission, Abike Dabiri-Erewa, confirmed the incident, adding that the school director, Parag Jain and seven others culpable in the matter had been arrested