Police rescue man locked up for three years by parents 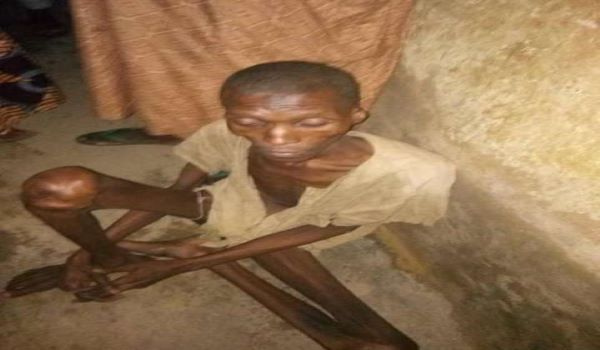 A Nigerian man has been rescued from the garage of his parents’ house in the northern city of Kano, where he had been locked up for three years, police say.

Ahmed Aminu, 30, was discovered after a police raid on the family’s residence in the Farawa area of central Kano on Thursday morning.

Neighbours had alerted a local NGO, Human Rights Network, about his plight, and the police were then called.

Some reports said he had been locked up for seven years.

In a horrific video shared on social media, an emaciated Mr Aminu, too frail to walk, was assisted by members of the NGO into a vehicle as he was taken to hospital.

He had visible calluses on his knees and his bones were apparent through the little flesh left on him.

“We found Aminu in a terrible situation, urinating and excreting in same spot without [being] given any food and looking like he was going to die at any moment,” Haruna Ayagi, head of Human Rights Network, told the BBC.

Mr Aminu’s father and step-mother have been arrested and the case is being investigated, police spokesman Haruna Kiyawa said in a statement.

Police said the man had been locked up by his parents on suspicion of drug abuse and left without proper food and health care.

This is the second time this week a victim has been rescued from horrific conditions in their parents’ house in Nigeria.

On Wednesday, police in north-western Kebbi state rescued a 10-year-old boy from an animal pen where he had been kept for two years by his parents.

This is how Africa leverages China’s $730bn belt and road initiative to ...