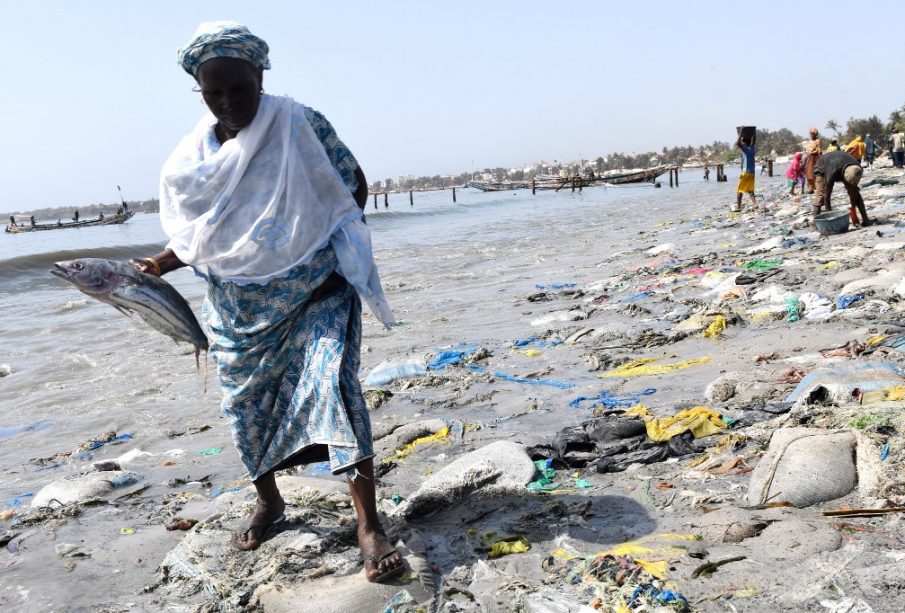 Once an idyllic stretch of white beach enticing fishermen and tourists alike, decades of factory and household waste have turned Senegal’s Hann Bay into a dump. The shore, which separates an industrial zone in the capital Dakar from the Atlantic Ocean, is now a shocking sight.

It is littered with plastic dirt as far as the eye can see. Lacking sufficient waste removal services, residents either have to roll up their sleeves as volunteers trash collectors or pay private firms to clean up.

The pollution problem is receiving more attention, with President Macky Sall broaching the issue in his April 2 re-inauguration speech which mooted a “zero waste” future for Senegal.

On paper, trash collection in greater Dakar is a government service. But more than 10 percent of households do not have rubbish pickup, according to Lamine Kebe, a coordinator for the public waste-gathering service UCG.

In some areas this percentage is far higher, particularly in far-flung suburbs. There, rubbish trucks battle to make their way through litter-strewn streets.

On a recent Saturday morning, a few dozen young people sporting gloves, spades and rubbish bags were hard at work in Hann Bay, heeding a cleanup call from Senegal Entraide, a grouping of public service volunteers.

Cash for trash in Hann Bay

A Development Agency, which backs measures to clean the bay, notes that “60 percent of Senegal’s manufacturing industry lies along Hann Bay and empties its polluted effluents directly into the bay”. Residents, too, play their part, dumping everything from plastic bags and clothes to kitchen scraps, animal carcasses and toilet waste.

“Citizens should not ask what their district can do for them, but what they can do for their district,” said Senegal Entraide president Mahmoud Sy. The cleanup task is too big for volunteers alone, and many people have started small, informal businesses, earning cash to take away the trash.

One such entrepreneur, Ma Niang Dieng, daily sends carts hauled by donkeys or horses around the alleyways of Rufisque, a labyrinthine Dakar suburb home to a major industrial zone. Many of the roads are impossible for cars or trucks to navigate.

“These are the zones where we work,” Dieng explained. In the paved parts, public lorries fetch the waste, “but it is in the nooks and crannies that we intervene most of the time”. Dieng observed the comings and goings of his employees, responsible for bringing garbage to a local depot from where a UCG truck would take it to the city’s rubbish tip.

Residents pay a monthly fee of 1,500 CFA francs for Dieng’s services, “which isn’t expensive,” in the view of a Rufisque school headmaster, Moustapha M’Baye. Dieng said he pays each of his cart drivers about 55,000 CFA francs per month.

Such private initiative is welcomed by the UCG, Kebe said. Every day, UCG lorries collect some 2,400 tonnes of waste in the greater Dakar region, which has a population of more than three million. “We don’t have the human and material resources to deploy to every district,” Kebe said. “So when an association accompanies the process, we can only congratulate them.”

But meeting Sall’s ambitious long-term goal of “zero waste” is more than a matter of resources, Kebe added. Success will also require a mindset change from industry and from residents themselves. “We sweep up, we collect, but two minutes later, it’s like nothing has been done,” said Kebe.