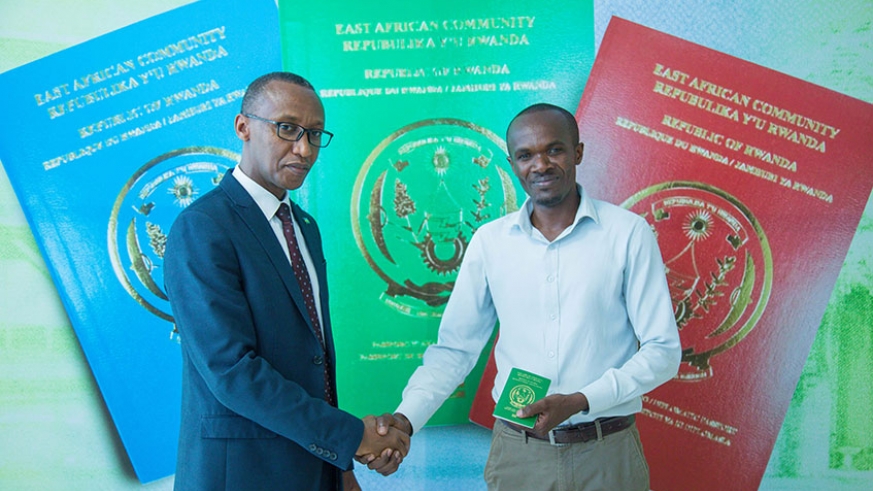 Rwanda on Friday started issuing the Rwanda East African Community electronic passport through the Directorate General of Immigration and Emigration.

The new document is in compliance with the new East African Community technical specifications as well as International Civil Aviation Organisation, making it admissible globally.

This follows a directive by EAC heads of state in March 2016 to adopt the new generation passports and phase out variant documents.

François-Régis Gatarayiha, the Director General of Immigration and Emigration said that the new documents feature enhanced security features ruling out chances of forgery and identity theft.

Among the new features include a microchip making it tamper-proof. This new feature will capture biometric data ensuring identification of the holder.

He said that the agency had upgraded necessary capacities to be able to issue the new documents to citizens aware of a likelihood of growth in demand.

The new security features could, among other things, increase the chances of making the Rwandan passport ‘stronger’ to grant its holders access to more countries without stringent visa requirements.

Holders of the existing national passport have a two-year grace period to replace their travel document with the deadline lapsing in June 2021.

Gatarayiha said that application of the new document will be via the government service delivery portal Irembo.

On payment of the fees, applicants will receive a text message requiring them to present themselves at the Directorate General of Immigration and Emigration where they will have their picture and fingerprints taken.

Directorate General of Immigration and Emigration said that they have the capacity to receive a surge in applications (of new documents and renewal).

Prior to the launch of the new document, Gatarayiha said that they had capacity to process between 150 to 200 hundreds. However under the new system, he said they can process and issue documents on demand, regardless of the number of application.

He noted a growth in demand for the passport in the recent past with applications growing from about 40 per day to 150 daily. The majority of applicants are made up of students and business people.