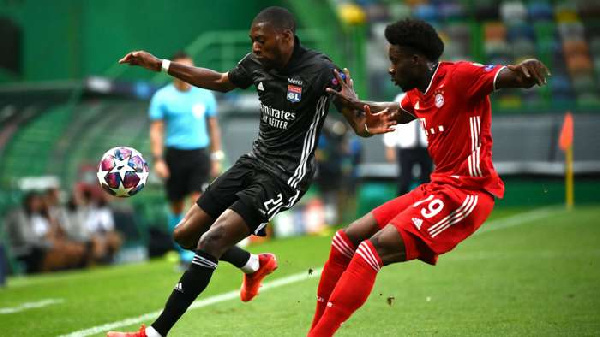 Olympique Lyon forward Karl Toko Ekambi has admitted success was not on the side of the French club after they fell 3-0 to Bayern Munich in the Champions League semi-finals on Wednesday.

Les Gones were hoping to make it into their first-ever European final and also making it an all-French final after Paris Saint-Germain dispatched RB Leipzig in the other semi.

It was however not to be with a brace from former Arsenal winger Serge Gnabry and Robert Lewandowski’s 15th European goal of the season destroying those ambitions.

Toko Ekambi had a chance to give Lyon the lead in the 17th minute but his shot hit the post after showing beautiful skill and ghosting past Liberian-born Canadian Alphonso Davies. It was not long after that moment Gnabry opened the floodgates.

“We said to ourselves that we could have done better, to score goals, me first,” the Cameroon international said.

“Success was not on our side. We missed opportunities, there was a great goalkeeper [Manuel Neuer] in front, ours [Anthony Lopes] also made saves. It was an open game, there were chances, but congratulations to Bayern.”

The defeat brings an end to what was a strong campaign for Lyon. They finished second in Group F behind Leipzig and ahead of Benfica and Zenit Saint Petersburg before going on to end Juventus’ hopes of Champions League glory in the round of 16 followed by a 3-1 win over Pep Guardiola’s Manchester city with Ivory Coast international Maxwel Cornet netting in the game, his fourth against the Citizens under Pep’s watch, the same tally as Barcelona superstar Lionel Messi.

Franco-Algerian midfielder Houssem Aouar has been at the heart of Lyon’s progress, providing six assists, four of which came against Juventus and City. The 22-year-old – who has been linked with some of Europe’s biggest sides including Man City, Barcelona, Real Madrid and Arsenal, took to social media to express his thoughts, feeling honoured and proud to have been part of the journey.

“It is with immense sadness that our adventure comes to an end. What an honour and pride to have been able to experience these moments with my training club. A big thank you to the supporters for the support they have given us. Congratulations to all. Thank you,” Aouar posted on Twitter.

Toko Ekambi and Aouar will now focus their attention on the 2020-21 Ligue 1 season which they will kick off with a home tie against Dijon on August 28.