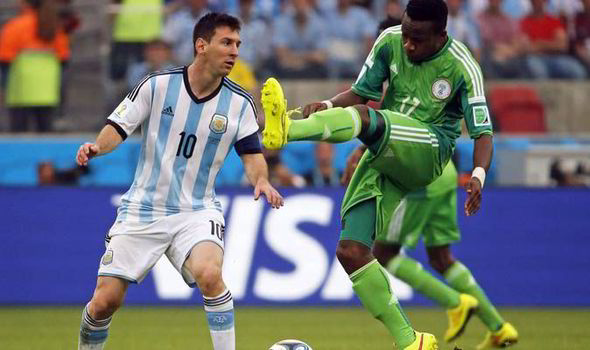 Former World Footballer of the Year and Argentina Captain, Lionel Messi, has revealed how the 2-1 victory the Albeceleste recorded against Nigeria in their last Group D match of the 2018 World Cup in Russia remains one of his most important matches with the national team.

The FC Barcelona captain, who is yet to win any silverware with his country despite a trophy-laden chest with the LaLiga giants. Messi only have trophies and medals from junior competitions in Argentina colours.

In an interview with Fox Sports yesterday ahead of the Copa America tournament, Messi revealed that if Argentina had lost and was eliminated by Eagles in that decisive match in St Petersburg, critics were already waiting for them back home.

He insisted that such humiliation would have pushed many players of his generation to quit the Argentine senior national team.

Nigeria was on the verge of qualification for the next round after Victor Moses’ penalty cancelled out Lionel Messi’s early strike to level score with Nigeria having the advantage to pick the runner up ticket to the knock out phase. But Rojo’s late strike changed the permutation and the South American advanced to play cup eventual winners, France in the second round which they lost.

“When we lost and crashed out of the tournament, we knew our time was up because our preparation and focus towards the tournament was not too impressive. It would have been very humiliating if Nigeria had eliminated us at the group stage.

“The World Cup in Russia was a complicated period for us. But people knew we were not candidates to win. Today is different, I see a young and excited group ready for success.

“When we qualified against Nigeria in the World Cup everyone who was mocking us was silent, they wanted us to be humiliated. If we were knocked out in the groups they would have killed us all,” he disclosed.

Messi also spoke about other issues and his main rival Cristiano Ronaldo whom he said he missed greatly since he left Real Madrid for Juventus last season.

“There is no battle but a healthy one. Cristiano is a great player and of course he motivates me to be even better.”

“Not only La Liga is missing Cristiano, I do also. He made Real Madrid more important.”

Leo also talked for how much longer does he intend to play and if he considers becoming a coach once retired:

“Retiring? The day I do not enjoy football anymore, I will quit.”

“I want to finish my career having won something with the national team.”

“When I started to play football my dream was always to reach the national team of Argentina.”