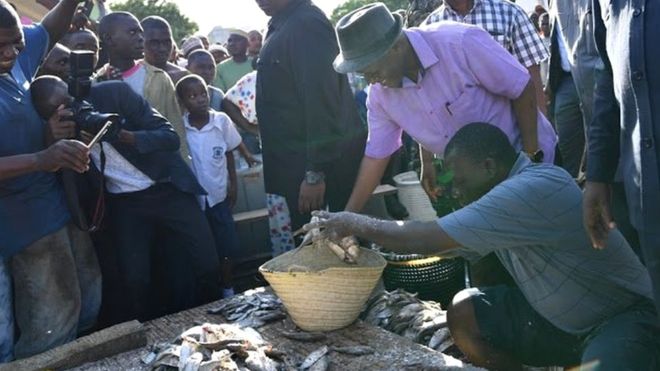 It is unusual for a man to carry a shopping basket in Tanzania, especially someone of the president’s status.

His defiance of convention is likely to give more weight to the ban that came into effect on Saturday.

Those found with plastic bags now face fines of up to $87 (£68) or up to seven days in jail, local media reports.

For anyone caught manufacturing or importing plastic bags, the fine could be $430,000 or up to two years in prison.

Tanzania is one of more than 30 African countries to have brought in a ban on single-use plastic.

Travellers arriving in Tanzania – a tourist hotspot – are now being asked to surrender plastic bags at the airport.

On his trip to the fish market in the coastal city of Dar es Salaam, Mr Magufuli, who is nicknamed “The Bulldozer” because of no-nonsense attitude, said he wanted to prove that shoppers in Tanzania no longer needed to use plastic bags.

He added that customers should not pressure fishmongers to hand over plastic bags.

Plastic pollution can have a huge effect on marine life and plastic bags have been blamed for flooding in cities by blocking drains.

“In a few years time the country will be safe from the effects of plastic bags,” the president said.

A local journalist Walter Maleko shared his amusement on Twitter about the president’s shopping trip:

It is not the first time the 59-year-old Tanzanian leader has made a stand against pollution.

In 2015, shortly after he was elected, he replaced independence day celebrations with a public clean-up operation and was pictured picking up rubbish outside State House.

His hands-on style of governing has won has praise from some, but critics accuse him of cracking down on freedom of expression during his more than three years in office.

What are the effects of plastic on the environment?

Fish and large aquatic mammals can be killed by plastic pollution. Whales can eat plastic bags, making it impossible for them to consume real food which can eventually lead to death.

When plastic debris breaks down from wear and tear, it does not decompose the way other products like wood do – but instead breaks down into smaller and smaller pieces, becoming “microplastic”.

These tiny fragments often end up in fish and can then be passed on to humans.

Large volumes of plastic waste wash up on beaches, where they can be eaten by sea birds and other animals and kill them.