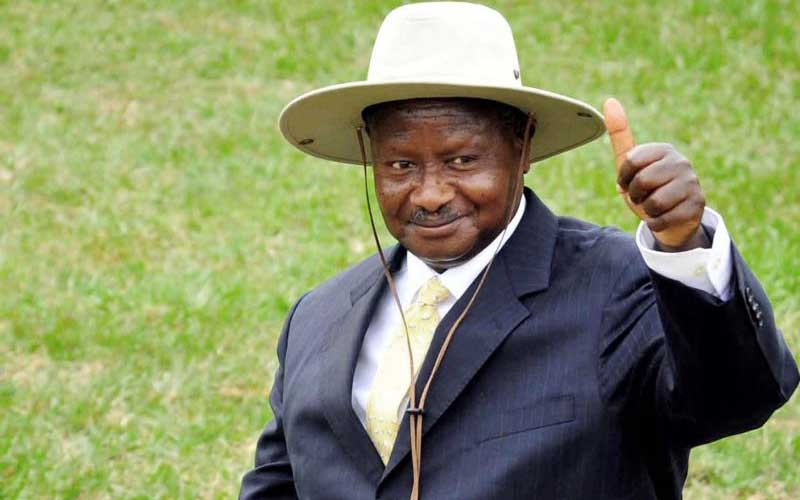 Uganda’s long-serving President Yoweri Museveni has confirmed he will be seeking to extend his rule to four decades after he picked up nomination papers on Monday.

Should he be re-elected in the February 2021 General Election, the veteran leader, who turns 76 this September, will continue to occupy State House since entering it in 1986.

“Mr Museveni sent his lawyers who picked the nomination forms for the positions of party flag bearer and chairman,” said Dr Odoi, adding that “he paid Ush10 million for each of the two positions.”

The National Electoral Commission has set November 3 and 4 this year as nomination dates for presidential candidates.
President Museveni took power at the age of 42 in January 1986 after ousting Apollo Milton Obote of the Uganda People’s Congress during his second term (1980 to 1985) and the short-lived military junta of Tito Okello and Bazilio Olara Okello through a guerrilla war.

The junta lasted only about six months.

Mr. Museveni ruled for the first ten years without holding elections. Ugandans went to the polls in June 1996 for the first time under Museveni following the passing of a new Constitution in October 1995 which had a two five-year term limit for the office of the President.

The term limit was amended ten years later, in 2005, allowing him to seek reelection in February 2006.

Another constitutional limit that would have forced the President to stand down in next year’s election on account of his age was controversially removed in December 2017 when the Constitution was amended to remove the 35 years and 75 years lower and upper age caps amidst fist-fights between opposition MPs and security operatives in Parliament.

At the NRM headquarters in Kampala on Monday, July 20, 2020, the party kicked off its countrywide internal primaries process issuing nomination forms for various positions and releasing the party register for some 65,748 villages, which according to NRM deputy secretary general Richard Todwong constitutes polling stations.

Several people including Mr. Museveni’s former comrades have indicated interest in contending in the presidential race but his main challenger in the last four elections, Col Dr. Kizza Besigye is yet to pick nomination forms from his party, the Forum for Democratic Change (FDC) and has been under pressure to drop the bid to lead the opposition after the failed attempts.

But Maj-Gen Mugisha Muntu, a former army commander and former President of FDC, Lt-Gen Henry Tumukunde, former spy chief and Minister for Security, among others have indicated they will challenge their former commander.

Also in the running, is rising opposition star, a musician turned politician Robert Sentamu Kyagulanyi aka Bobi Wine leading the People Power Movement. Mr Kyagulanyi has been a Member of Parliament for Kyandondo East Constituency since a by-election in 2017.

According to the Electoral Commission, about 45 individuals have expressed interest in the presidential race.

The commission says due to COVID-19 no mass campaign rallies will be permitted, advising contestants to use the media and other virtual means as the primary avenue to reach voters. The position is being challenged including in court.

No evidence to back Madagascar coronavirus cure claim – Nigeria