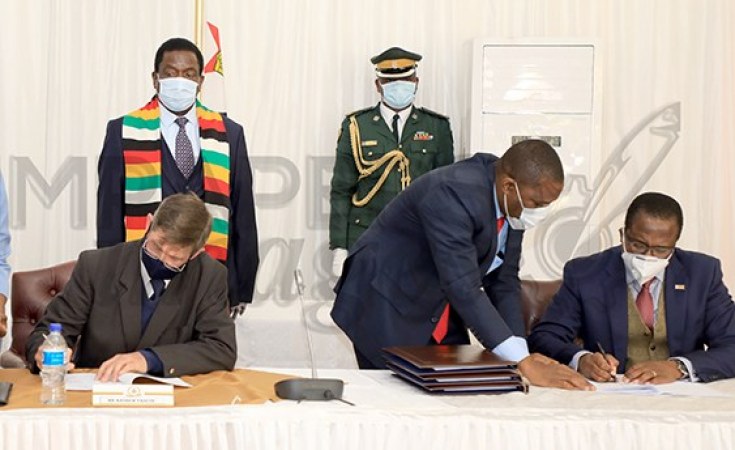 The 4 000 white commercial farmers who lost their farms during land reform will now be getting US$3.5 billion compensation for improvements after Government and the farmers’ representatives yesterday signed a series of agreements in a ceremony presided over by President Mnangagwa at State House.

The President described the agreements, bundled as the Global Compensation Deed (GCD), as a “milestone” that demonstrates the Second Republic’s commitment to re-engagement and constitutionalism.

Presiding over the signing ceremony of the GCD at State House, President Mnangagwa described the event as “historic” inasmuch as it closed the land reform chapter and sealed its irreversibility, sentiments echoed by the representative of the farmers who said the agreement sent a clear message to investors that Zimbabweans could work together and that the country was truly open for business.

The funding for the GCD will be mobilised by a team headed by Finance and Economic Development Minister Professor Mthuli Ncube, which includes representatives of the former farmers.

The compensation is for infrastructural improvements that the farmers did on farms, which were repossessed at the turn of the millennium to redress colonial imbalances. These improvements include land clearance, drainage, irrigation trenching, fencing, dams and boreholes, as well as buildings.

The agreements were signed by acting Agriculture, Lands and Resettlement Acting Minister Oppah Muchinguri-Kashiri for the Government and by the Commercial Farmers Union, which represents the farmers affected, plus the Southern African Commercial Farmers Alliance, Valuation Consortium (Pvt) Ltd and the Compensation Steering Committee.

The President said land was at the heart of the country’s liberation struggle of the 1960s and 1970s, but the Lancaster House constitution “entailed that land could not be compulsorily acquired during the first 10 years of independence”.

With hands tied by constitutional requirements contained in the Lancaster House constitution, the Government adopted a willing buyer willing seller principle after independence in 1980, but because few wished to sell, success was limited.

The legality of the major land reform thrust of the early 2000s was confirmed in 2013 when an overwhelming majority of Zimbabweans approved in a referendum the present Constitution which incorporates the irreversibility of the land reform but makes it clear that the holders of the appropriated land were entitled to full compensation for their improvements.

Land was not included, and has not been included, in the constitutional provisions or yesterday’s agreements. The land had been seized by the British South Africa Company with backing from the British Colonial Office in the early 1890s through fraudulent land concessions in the east of the country and open war in the west.

Through the Land Apportionment and Land Tenure Acts the settler governments physically removed the original inhabitants. This was the injustice that land reform addressed, along with practical requirements of breaking up large estates.

While land was expropriated in the First Republic, the promised compensation for improvements was never paid. But upon achieving the presidency in 2017, President Mnangagwa pledged that the Second Republic would entrench constitutionalism, the rule of law and respect for property rights, and has since made it clear that this included compensating the white farmers for improvements on the land expropriated, a commitment which culminated yesterday in the signing of the historic GCD.

“The signing of these agreements is merely a building block to what lies ahead. More work must be done. As Zimbabweans, we must all work together for increased productivity, to achieve food self-sufficiency and nutrition; raw materials for our industries and exports for the international market. All of us have a role to play to ensure that our Agriculture Recovery Plan is a success.

“We cannot change the past; we can only learn from it. I therefore, exhort you to build on the goodwill and trust we have developed from experience of negotiating for these agreements, to move forward with the national interest as the overriding principle,” he said.

The President made it clear that the signing of the agreement does not mean that the Government will compensate for the land and that the contract does not create any liability to the country.

On his part Prof Ncube said the compensation will involve mobilising resources within the country and globally using different platforms.

“The agreement is that we create a resource mobilisation committee that I chair and we will travel around seeking funding to finance the compensation needs but of course the compensation is also a way of financing agriculture. We have a strategy and we will unveil it as we go on. We will start (working) this week and the work starts now to make sure that Zimbabwe moves forward,” said the minister.

An emotional president of the Commercial Farmers Union, Mr Andrew Pascoe, said the unity of purpose that Zimbabweans exhibited in coming up with the agreement will make it easier for the country to mobilise resources and catch the attention of international investors.

“Today marks a huge milestone in that today we are coming together and that as Zimbabweans we have decided to put aside our differences and have resolved to work together to resolve this outstanding issue. I am convinced that we as Zimbabweans, if we continue working together in the spirit of unity as we have demonstrated so far, we will succeed and the recovery of our economy will become a reality, and it will bring to an end conflicts that have impacted all our lives. This agreement will send a clear and unambiguous message to both local and international investors that Zimbabwe is really and truly Open for Business,” he said.

After Zimbabwe resolved outstanding issues of the land reform through the signing of the GCD, what remains now is for the farm right-sizing exercise to begin so as to ensure that Zimbabweans benefit from the land.